Recently a rhino poacher was stomped by an elephant and then eaten by lions as steak tartar. Is evolution working here?

That a rhino poacher was stomped by an elephant and then made into steak tartar by lions may well be evidence of Evolution In Action.

TL;DR You’re going to have to ask the elephant in the room.

I sincerely hope it is evidence of that premise. 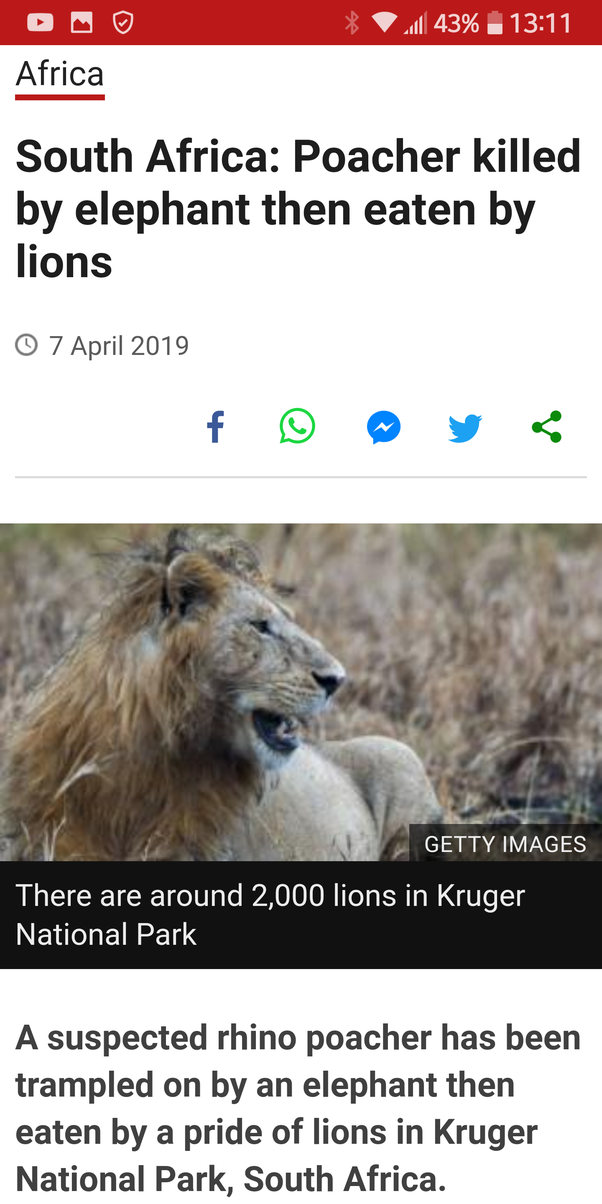 Sadly, since we don’t currently have any usable tools for opening a discussion with either the elephant or the lion about their motivation here, we can’t prove whether it’s evolution or something else operating. We also can’t prove whether they conspired, or if the elephant simply acted on their own out of pique and left the new carcass to its own luck.

Personally, I’d attribute it to Quick Karma biting him in the ass.. Deservedly.

Nope folks, this isn’t a joke.

I’m completely serious in my assertion that we honestly can’t determine whether or not this glorious event is the result of the evolution of species. It may well be, and I honestly hope it is.

Elephants are extremely smart critters even with the lack of opposable thumbs. They’re also known to be affectionate and gentle towards folks who show them kindness, and they’re able to bear long term grudges against those who harm them or their families.

Ever heard the expression “An elephant never forgets!” or “They have the memory of an elephant!”? Guess where that idea came from..

Elephants have amazing long term memory and I suspect are able to plan as well. I can’t prove it, but I’ve worked intimately with horses over two decades during my younger days and I can guarantee to you that horses (which aren’t as intelligent as elephants) absolutely can plan and they teach each other a great many things our hubris wouldn’t believe. I’ve seen it in action IRL.

The other issue here is that nasty old bugaboo: human hubris. We are taught from childhood (indoctrinated IMO) to believe that we’re the “smartest animals” simply because we have opposable thumbs and use mouth noises for language, when in reality the only thing those facts really tell us is that we’re able to communicate with each other over distances which exceed the grasp of our relatively puny senses.

A legitimate case could be made that we humans are actually the stupidest of animals for the simple reason that we are the only animals on the plant who’ve willingly destroyed the entire ecology which sustains us. Empirically, that’s a dumb move on the level of sheep, lemmings or starfish. When we contrast that against elephants who plant trees with their feces.. Well what can one say?

If you’re upset that I’m fairly disgusted with my fellow humans I’ll ask you to look hard at the 2016 election where we had, as our only “legitimate” “choices,” a corporatist “vs” a corporation.

Sorry/ Not Really tho.

More to the point; I’m just sorry if those #DamnedFacts hurt. Besides that I couldn’t care less about feelers.

I’m a damn Aspie and am not wired that way.